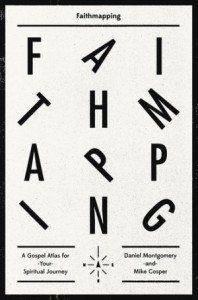 I enjoy reading what dead guys have written, but there’s some things that are explained uniquely by the pastors and theologians of this generation.

In Chapter 3 of “Faithmapping“, Daniel Montgomery and Mike Cosper combine to deftly explain and illustrate why the grace that saves Christians motivates them to live holy lives:

Paul asks the notorious question in Romans 6: “What shall we say then? Are we to continue in sin that grace may abound?” (Rom. 6:1), and we all begin to squirm in our seats. If grace means that our religion merits us nothing, then why on earth would we torture ourselves with moral purity, monogamy, and sobriety? If I can literally do nothing to save myself, then why shouldn’t I commit myself to a life of doing nothing?

… Consider Paul’s own response to his question:

“By no means! How can we who died to sin still live in it? Do you not know that all of us who have been baptised into Christ Jesus were baptised into his death? We were buried therefore with him by baptism into death, in order that, just as Christ was raised from the dead by the glory of the Father, we too might walk in newness of life.” (Rom. 6:2-4)

Paul’s response is not to say, “Don’t do it! You’ll ruin everything if you sin again!” He’s saying, “You don’t get it! You don’t live in that world anymore. Everything has changed because of the gospel!”

(Here’s where I had a bit of a chuckle…)

It’s like the difference between being a zombie and being a living person.
Zombies have no interest in literature or science, no table manners, no concern for job skills and personal marketability. They’re focused only on eating brains and moaning. They’re dead to literature, dead to music, dead to a family meal. If they’re miraculously healed, they’ll suddenly be alive to all of these things. “Should we keep eating brains so that we’ll be all the happier not to be zombies anymore?” By no means! You’re not a zombie anymore!

Amen – I’m no longer a zombie anymore! 🙂 This is how some saints now in glory (not as zombies) phrased the same idea:

“Regeneration is not an aspect of justification, but both are aspects of salvation, and neither can take place without the other… The justifying work of the Son and the regenerating work of the Spirit cannot be separated (Titus 3:5-7).” – John Stott, The Cross of Christ, p.220

“The tree must be first, and then the fruit. For the apples make not the tree, but the tree makes the apples. So faith first makes the person, who afterwards brings forth works.” – Martin Luther, Epistle to the Galatians, p. 247, on Galatians 3:10.

I read “Rhythms of Grace” earlier this year, also by Mike Cosper, and thoroughly appreciated it. Am enjoying this one so far too. The big idea of this book is that the “gospel in all its forms” (channelling Tim Keller’s triperspectivalism) gives a beautiful coherent map for one’s entire spiritual journey in following Christ.

“Therefore, my dear friends, as you have always obeyed—not only in my presence, but now much more in my absence—continue to work out your salvation with fear and trembling, for it is God who works in you to will and to act in order to fulfill his good purpose.” – Philippians 2:12-13 (NIV)