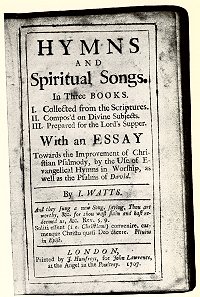 “…There are several reasons for opposing it. One, it’s too new. Two, it’s often worldly, even blasphemous. The new Christian music is not as pleasant as the more established style. Because there are so many new songs you can’t learn them all. It puts too much emphasis on instrumental music rather than Godly lyrics. This new music creates disturbances making people act indecently and disorderly. The preceding generation got along without it. It’s a money making scene and some of these new music upstarts are lewd and loose.”

– 1723 newspaper editorial,  written in  opposition to the hymns of Isaac Watts  (who wrote hymns like “When I Survey”, “Joy to the World”, and “Alas! And Did My Saviour Bleed”)

Many of us might read this quote now and chuckle, but it helps to illustrate that every song was once new, and was once contentious!

As a child of the 90’s, my musical tastes lean towards the contemporary. Yet I’m currently in a delightful season of rediscovering hymns – historical songs set to a regular meter, and crafted to make God’s truths poetic and melodious for the benefit of the church.

For example, we sang “All Creatures of our God and King” at church yesterday for the first time. Other really neat ones I’ve come across include I Asked the Lord, Hast Thou Heard Him, Dear Refuge of My Weary Soul, Jesus Your Blood and Righteousness, and God Moves in a Mysterious Way.

If you’ve grown up singing hymns, you might be curiously amused at my enthusiasm. Yet I’ve noticed that it’s an odd thing for a guy in his 20’s to be really captivated by the beauty and eloquence of reformation-era hymnody.

I can’t quite pick out exactly why I’m so enamoured by these worship songs at the moment.

Perhaps it’s because I’m really enjoying the “re-tuned” hymns from singers and songwriters such as Indelible Grace and Red Mountain Music. For example, Cheryl and I had this setting of “From the Depths of Woe (Psalm 130)” by Martin Luther on repeat at home for at least 2 weeks:

Or perhaps I’m fascinated by hymns at the moment because I’m realising as I sing them to my daughter, that I never got the opportunity to be immersed in them in my own childhood (I became a Christian at 18, from a nominally Buddhist/materialistic upbringing).

Perhaps by God’s grace I missed out so I could cherish them more today, and they would be as new worship music to me!

Anyways – whatever your own preferences are on the use of historical hymns in your sung worship, I also really appreciate Jamie Brown’s point on this topic:

The point isn’t the song. The point is the Saviour.  We should not be primarily interested in preserving a certain library of songs, protecting against an invasion of new music, persuading people that what they like is bad, or advancing our own musical preferences.

If our focus on song style blinds us to the primacy of God’s glory, woe to us.

God, help me to keep this perspective too!

One reply on “A word about new worship music”