Today (19 September 2019) is the LAST day for Kiwis to make a submission regarding the Abortion Legislation Bill currently undergoing Select Committee review. Please consider writing your own submission here – it’s free, you can even just say one sentence, and it’s a great way to be involved in the discussion of what’s literally a life-and-death issue.

Cheryl and I both know and sympathise with the difficulties women (and men) on both sides of the debate face. Our differences centre around balancing care for pregnant women, yet disagreeing on the status and of, and duty of care for the young life inside her.

Our submission is below. We tried not to restate what others have already done so well, but rather just shared some of our personal concerns. I hope it’s a helpful contribution to the discussion.

Concerns about the proposed Bill

Thank you for the opportunity to make a submission.

My wife, Cheryl, and I, do not support the proposed Bill for several reasons:

We agree in substance with the detailed submissions from Family First NZ, ProLife NZ and Voice for Life NZ regarding the harm this Bill will enable, and urge Members of Parliament to vote against this Bill.

Finally, I have attached an ultrasound scan of our unborn child at 7 weeks old. Despite his or her small size and stage of development, she or he has a steady fetal heart beat (147bpm), a unique DNA, and all the characteristics of a person. As we seek ways to better support women, it is also children like ours whom we wish to protect from harm.

In light of this:

Like Loading...
At a recent get-together for young mums, I was asked to share some of the ways I try and point our children (currently 4 years, 2 years and 4 months) towards the gospel – the good news about Jesus Christ. That my personality is disorganised, anxious and perfectionistic works against me. Yet Christ makes all things new! What a wonderful gospel to speak to our children.

“You were taught, with regard to your former way of life, to put off your old self, which is being corrupted by its deceitful desires; to be made new in the attitude of your minds; and to put on the new self, created to be like God in true righteousness and holiness.”

While it’s not exactly what I’m talking about, the principle off “putting off” and “putting on” is there. De-emphasise and emphasise.

Some ideas for de-emphasising everything else:

Ideas for emphasising the gospel:

So to emphasise the gospel as of first importance, I need to de-emphasise everything else. Do you more experienced parents have other ideas on how to do this? I’d like to hear them.

I have always been selfish, proud and self-reliant. Even worse, my heart is deceitful, constantly trying to disguise my sin, or deflect the blame. I usually succeed in deceiving others, and always myself. Jeremiah 17:9: “The heart is deceitful above all things, and desperately sick; who can understand it?”

I worked hard to maintain my deception. I had the praise of others. I took the moral high ground. I was a straight A student. “I’m a Christian, from a Christian family, I’ve even been baptised. Don’t tell me what to do.”

Romans 5:8: “But God shows his love for us in that while we were still sinners, Christ died for us.”

During this time, God placed me in churches where I began to hear the gospel. Though it didn’t inspire repentance, I became familiar with verses such as Romans 6:23: “For the wages of sin is death, but the free gift of God is eternal life in Christ Jesus our Lord.”

Quite a few years later, I dropped out of my law degree, then failed my Masters in Speech language therapy. This was because my uni lecturers wanted me to get diagnosed for, as it turns out, anxiety and Aspergers, among other things. Around the same time, I was trying to hide a trail of relational breakdowns in my personal life. I was increasingly disobedient to my parents. The divisions already tense in my family were made worse by my callous disregard of anyone else’s feelings. Once I scribbled hatred with a ballpoint pen over my parents’ painted walls. I also had an ongoing internet gaming addiction. I went to great pains both to feed it and to hide my tracks. At one point, I was clocking 16 hour gaming days behind my parents’ backs.

My academic failures upturned my delusions of self-sufficiency. I had gone from a straight A student to a law school and Masters dropout. Also, because the diagnoses were now out there for anyone to see, I could no longer use deceit to hide my various other sins.

In truth, the psychiatric world could only label behaviours it thought were dysfunctional. I realised those were just the tip of the iceberg. For the first time I saw that it was my sin that often caused the unresolved arguments, unspoken resentments, the sun gone down in anger so many times. Everywhere I looked was sin upon sin, a mess of devastated relationships I could not untangle.

Even now, I still marvel at the elegance of God’s grace. He fed me His Word over the years so I would know the gospel. He showed me the extent and horror of my sin. He arranged my life so that I could not conceal my sin; I had to confess it. My only hope was to trust in Christ’s righteousness, death and resurrection.

1 John 1:9: “If we confess our sins, he is faithful and just to forgive us our sins and cleanse us from all unrighteousness.”

So why am I here today? Haven’t I already been baptised? As an 18 year-old feigning holiness, I got into that pool and I got wet all right. But I was dead in my sin, there was no repentance, and my heart was hard to Jesus. I was not a believer.

So today, I am not getting re-baptised. I am being baptised for the first time, as a forgiven sinner, in submission to Jesus, a new creation in Christ.

Like Loading...
Beneath a grey, complaining sun,
we wandered, I and you,
disconsolate and dubious,
to where the milkweed grew.

But there were monarch caterpillars
nestled in the ‘weed,
and puffy green ballooning fruit
that scatters swan plant seed.

We glimpsed a tiny second-instar
feasting on a leaf;
The big ones wore their velvet stripes
in black and gold relief.

Behold! He clothes the tree and worm:
are we not God’s delight?
O anxious heart, seek first His realm,
and He will prove His might. 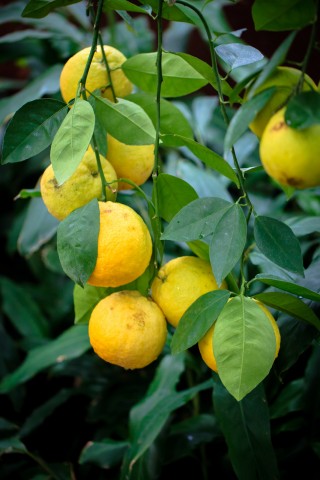 Many months ago, the first shape for which E learnt the word was ‘circle’.  At breakfast one morning, she stared out of the window, pointed, and said ‘circle’.  And indeed there were: little spheres sprouting on the tree in our next-door neighbour’s garden.

As the circles grew, so did E’s vocabulary.  Other words were added: tree, oranges, and eventually, as citrus spheres ripened from green to yellow, ‘grapefruit’. Since then our neighbour has kindly allowed us to gather little harvests from this tree, and now E may turn to us and request “dada take you in the onbu pick some grapefruit?”

Thank you God for giving growth, change – and fruit.

On the less metaphoric side, little girl’s Mama is now responsible for stewarding a really generous pile of grapefruit.  We can only drink so much grapefruit juice (keeping in mind it is yellow grapefruit, the really sour one, not the red, milder one).

We’ve gotten in contact with a local fruit harvesting/distributing charity, but while we’re waiting for things to get sorted we still have a large pile of grapefruit.  So for the last few weeks I’ve had the privilege of exploring how to fit a lot more grapefruit into our diet.  We’ve tried a variety of ideas.  Some have been great, some have been embarrassing, all have been fun.

Today was cookies.  The classic sugar cookie (I was using a strict 1:2:3 ratio) requires no liquid, so I had to reduce the grapefruit to as little liquid as possible to avoid ending up with cake or scone.  I zested and juiced two grapefruit, then simmered it in a pan to evaporate it into a gel.  I then creamed butter and sugar into this gel, spices including salt, and finally flour with baking soda.  E cut hearts in the dough with a cookie cutter, and into a hot oven they went until they started to singe.

The result was fun.  It looked like shortbread, smelled like shortbread, but tasted like, in William’s words, “that tree out there!”  It had a flavour as intense as the filling of a centre-filled cookie, only there was no filling.  We kept tasting it (grapefruit!) and then smelling it (shortbread!) repeatedly because it was so bizarre that there was no visual/olfactory/tactile sign of the extreme grapefruityness therein.  A pleasant surprise to the end of a busy Saturday.

What are your suggestions for how to use grapefruit?