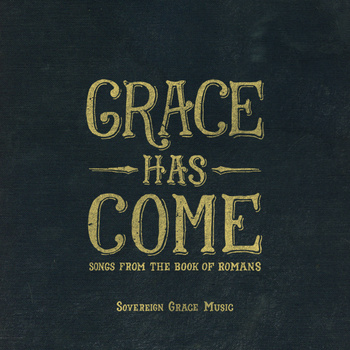 Sovereign Grace Music have been putting out theologically rich and well-crafted songsÂ for years in service to the church and congregational singing. I remember the first CD I listened to was “Come Weary Saints”, and thinking at the time, “a whole album on suffering well? Wow!”

Grace Has Come is their latest album, which I’ve enjoyed listening to on repeat for 2 weeks now.Â Here’s a collection of thoughts:

Slightly unrelated, butÂ one day I hope SGM will put out an album of their most popular songs, but record them in a way that’s transferable to small music teams (Emu Music’s Songs for Little Rooms is a good example of this). As I listen through this album I’m sometimes made aware that some of these songs wouldn’t be realistic for our musicians to grapple with.

Overall though I really appreciate this latest contribution to contemporary worship. I heard someone once say that Christians general sing and write songs about what’s really important to the normal Christian life (when was the last time you heard a song about eschatology?) SGM certainly have been trying to broaden what we would praise God about in this album – his election, his righteousness, our justification, etc. So I’m grateful for that!

Note: Bob Kauflin has kindly offered all STAND conference attendees a discount off thisÂ album. Simply visit the Bandcamp pageÂ and enter the codeÂ standforthegospelÂ for a 20% discount off the price. The code expires 31 August. You can also download one of the tracks, “Nothing In All The Earth” for free here.