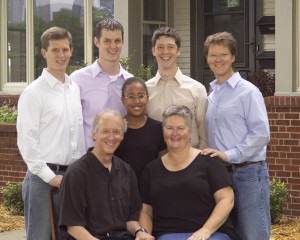 Here’s some neat ideas from John Piper on training your children in family and personal devotions, even before they’re 2 years old:

Q: How did you do family devotions when your kids were real little?

It was at the breakfast table in those early days. So you have a child who is now rested–at least it’s the way it worked for our boys and Talitha–they were rested and had a full tummy. So they were relatively happy.

And at that moment Daddy gets out a big book. And he reads from it, a paragraph maybe. This little child doesn’t understand anything I’m saying. He’s six months old, or nine months, or a year.

So he is included in family devotions. He is being trained in devoting himself to God through his word.

And on personal devotions:

The individual pattern is, back in the days when they had cassette tapes, we had these indestructible child cassette players. I presume they still have them. You could throw it across the room and it wouldn’t be destroyed. It had big wide red buttons.

And so here’s our 18-month old listening to Bible stories on his own. “You have devotions now. This is your time. You take your big machine over there, you push your red button, and you listen to your story and say, ‘Thank you, Jesus.'”

You can listen to the whole Ask Pastor John podcast  here.

(HT: Nahomi Dhinakar – who has kindly offered her insights too)