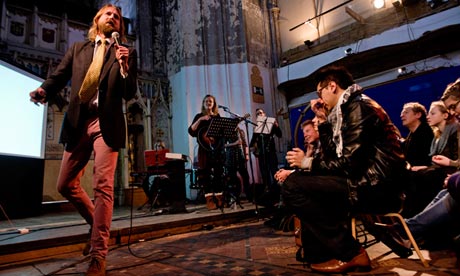 Recently two London comedians decided to start a Sunday Assembly  “anyone who wants to live better, help often and wonder more”.  The idea of an atheist church has been wildly successful,with packed weekly services since the first gathering in January (they now run two services!). It’s been such a hit that the organisers are now offering help to spread the idea across the UK and beyond – a church-planting strategy, if you will.

So what exactly happens  in one of these services?

Simon Jenkins went to find out  one week and found it an interesting experience as a professed Christian. It was the BBC’s turn to report on it another  week, where  the order of service was:

Each Sunday Assembly so far can basically be boiled down to some common elements:

Sound familiar?  How ironic that in seeking to meet around atheism, they are using forms and structures that come from a Christian worship framework!

Christians meet on Sunday to celebrate the day Jesus rose to defeat sin and death.

Christians sing songs to recall how God has redeemed them as a people.

Christians give generously so that the good news of Jesus can spread and people can be cared for.

As a commenter in Simon Jenkin’s review points out:

“If people are so desperate to claw back some of the social aspects they lost or feel is missing by not being part of a church, then they’re just being honest about the real reason churches exist. There’s no need to copy their structural formalities to get that feeling back.” Interestingly since the desire to spread the godless church, Sunday Assembly folks have even put together  pseudo-guidelines for worship / statement of unfaith to help you run your own atheist church wherever you are.

Here are some of their “regulative principles”:

It’s hard to know what to think in this case.

Is imitation the sincerest form of flattery?

If atheism is a conviction so strong you’d want to gather around it, isn’t it basically a faith system?

If you’re an atheist, would you head to a “Sunday Assembly” like this if one was available in town?