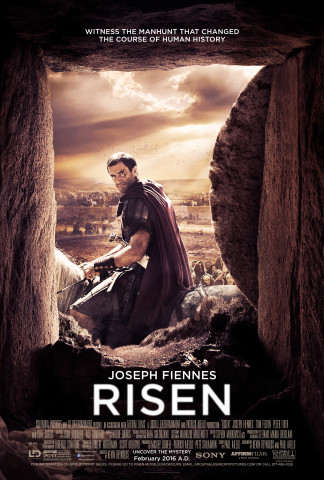 I’m  a bit of a skeptic when it comes to “Christian” or faith-based movies. Perhaps  it’s the need for mass-market appeal, or the pressures of getting a box office success. But not only are most faith-based movies not that good artistically, they’re often theologically suspect. The Prince of Egypt calls the viewer to a vacuous “there can be miracles if you believe” (in what? yourself?). The Passion of the Christ’s main inspiration is from a Catholic mystic’s fanciful  dreams and meditations. Then there are the flat-out untrue  depictions of biblical stories and characters on the big screen – Russell Crowe as Noah the eco-terrorist, Christian Bale as Moses the schizophrenic barbarian, and the myriad of actors as  shampoo-commercial  Jesus. While  the power of film make these portrayals emotionally  compelling, I find it  hard to get excited about  them.

Risen – directed by Kevin Reynolds has just been released in time for Easter. It’s a novel premise – Roman soldier Clavius (Joseph Fiennes) is a battle-hardened veteran fighting to keep the peace in Roman-occupied Judea. He witnesses the crucifixion of Jesus, but three days later is tasked  by Pilate with job of detective: finding out why Jesus’s body is missing from the tomb. It’s cleverly written in that this skeptical Roman soldier is woven  into  many familiar Biblical narratives of Jesus’s death and post-resurrection appearances, and meets many of the same characters in these eyewitness accounts (e.g. the centurion, Barabbas, the Romans guarding the tomb, Pilate, Jesus’s disciples, and eventually Jesus himself) Spoiler alert: Jesus is alive!

After watching it yesterday morning with low expectations, I was actually pleasantly surprised. In summary, while it’s not for everyone, it’s a pretty good film and  a great conversation starter for both  Christians and skeptics alike.

There are already some thoughtful reviews from Christians (here and here), but here are some of my own  specific observations.

Some cringe moments or things to be cautious of:

I think Risen is good enough to watch, whether with Christians or non-Christians. It’s a great starting point for a further conversation or exploration of the historicity of the biblical accounts, but also the spiritual significance of these events. Perhaps  after the movie, you’d want  to affirm people’s deep desires, and wrestle with the evidence that Jesus did rise. But ultimately, this movie (or any movie)  can’t do the job of answering the question of why the resurrection matters. For that, you’d need to do what Jesus did:

“And beginning with Moses and all the Prophets, he interpreted to them in all the Scriptures the things concerning himself.” – Luke 24:27

Risen is a film that poses great questions about the historicity and significance  of Jesus’s death and resurrection – timely as we approach public holidays in his honour. But  only the good news of Jesus, explained in the Bible, can provide the best answers to these questions, and satisfy our  longings for peace, certainty, and a day without death.