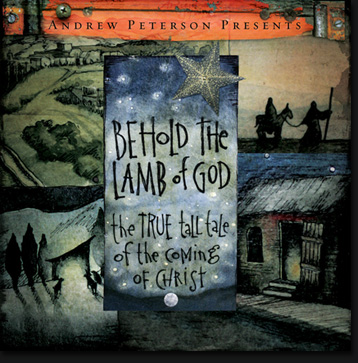 This is a fantastic idea – a concept album that tells the entire story of the Bible. Singer-songwriter Andrew Peterson has been touring and performing these songs for 10 years now. The album is made up of about a dozen songs, most brand new compositions, some rearrangements of older hymns, but all of it having a fresh, vibrant sound.

It comes across as a 21st-century version of what Baroque composer G.F. Handel did this a couple of centuries ago with “The Messiah” – crafting and presenting the gospel message of the Bible using good music. The lyrics to “Behold the Lamb of God” are great – they do use a bit of poetic licence in fleshing out some of the songs, but in general stay true to the Scriptures in faithfully retelling “the old, old story”.

Another thing that impresses me is that the album includes songs such as “Passover Us”, “So Long, Moses” and “Deliver Us” that rightly portray the Old Testament narratives (e.g. the Exodus, the rise of King David, the fall of Israel) as foreshadowing, and looking forward the coming of Christ.

And the best thing? You can hear the entire musical/album here for free:
Behold the Lamb of God: By Andrew Peterson. (HT: Jamie Brown)

My favourite song so far is “Labor of Love”, which paints a heartbreaking and gritty picture of the birth of the baby Jesus:

And then a bit further on, my favourite lines:

What a profound thought — the baby Jesus that needed a nappy change, simultaneously sustaining the entire universe (Col 1:15-17) — captured so eloquently with these lyrics.

Thank the Lord for bringing up thoughtful and creative songwriters that help us to see the Redemption story in new and fresh ways. I’m looking forward to seeing how we could use some of this material in 2011.

But in the meantime, I’d invite you to play the whole album, whether you’re doing some housecleaning, Facebooking or just on holiday.

One reply on “Behold the Lamb of God: By Andrew Peterson”