Last week’s Sunday service was definitely something different, for a number of reasons: 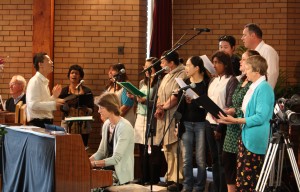 By God’s providence all three of these exciting things happened to fall on the same day… so it was a busy week preparing for this one! Here’s a recap of the service (31 October 2010).

1. A Mighty Fortress – Martin Luther. It’s commonly known as the battle cry of the Reformation, and based loosely on Psalm 46. A line that is sometimes lost on us today, has heightened meaning when you consider the trials and persecutions the early reformers went through:

Let goods and kindred go
This mortal life also
The body they may kill
God’s truth abideth still
His kingdom is forever!

2. Glorious and Mighty – Todd Twining, Joel Sczebel. There’s quite a few churches that have done excellent choral renditions of this very easy-to-sing, rousing song. We opted for an easier part which dropped the extended choral bridge, but kept the interesting descant parts of verse 3 (you can hear two different arrangements — both done well —  here and here).

I also like how it doesn’t shy away from declaring: “Over all the plans of the nations Your judgements reign”.  The lyrics are straight from Psalm 96, which is worth pondering on whenever the pangs of this fallen world become overwhelming and disheartening.

Testimonies, Baptisms. We had a guy that was saved by watching a Youtube clip of the gospel, another that was an ex-Mormon, former alcoholic, one that gave her life to Christ when pondering on life after friends she knew died in the Elim drowning tragedy. All glory to God for these testimonies.

3. I Hear the Saviour Say (Jesus Paid it All). A beautiful hymn to follow the baptisms, and to carry on the Christ-centric theme of the morning.

“Jesus paid it all
All to Him I owe
Sin had left a crimson stain,
He washed it white as snow!”

Bible reading. The following was from my notes (and Peter referred to the same thing in his sermon):

A leading figure in the reformation was a man named William Tyndale. He was the first to translate the bible from the Hebrew and Greek texts into English, so that everyone could have access to the Word of God. For his work in doing this, and being part of the reformation, he was tried for heresy, strangled and burnt at the stake in 1535.

To celebrate Tyndale’s legacy, that by God’s grace we have today the sacred scriptures in a language we can understand, let’s all read a passage together. Our scripture reading today is from Colossians 1:15-23.

4. All I Have is Christ – Devon Kauflin. We have to be careful not to do this one too often, because each time we do it the church really engage and respond by exulting with really, really loud singing! This song is the equivalent of a movie blockbuster in my mind… and I think when the gospel is spelled out so clearly in the 2nd verse, you just can’t help but sing at the top of your voice:

You can watch a clip of the “HBC choir” in action with this song:

Sermon. Peter prepared a special Reformation Day message, honing in on one of the “solas” of the reformation — solus Christus, or  “Christ alone”. He showed from the bible how Jesus is the only way, the only mediator, and the only hope for this world. You can watch him in full flight here.

5. In Christ Alone – Keith Getty, Stuart Townend. On Peter’s request, we closed with the same song as the week before. But what other song would work better to follow a strong, stirring message that in Christ alone is our only hope?

Some observations and lessons learned from this service:

With the diversity of musical giftings in our music team, it’s been really refreshing to see that our church is game enough to worship the Lord in music accompanied by a four-part choir one week, and accompanied by a well-oiled rock band another week. As one person said to me afterwards: “Man, I can’t wait to hear what musical styles we’ll get in heaven!” If anything, I’m sure it will surpass all our expectations and shatter our own limited preconceptions.