(William: I finally started on John Stott’s “The Cross of Christ”. Considered to be his magnum opus, and until last week sat proudly on my bookshelf as a paperweight. Well 30 pages in and I am already transfixed and ready to discover why the universal symbol of the Christian faith is a cross, and why Christ had to die.) 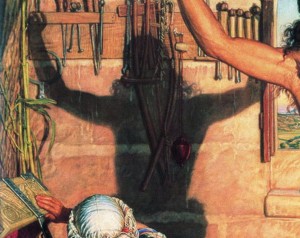 The Bible is full of historical events that act as a type of, or foreshadow, Jesus’s work of redemption. John Stott opens his book by describing an 1873 artwork of Jesus Christ (viewable here):

“Do you know the painting by Holman Hunt, the leader of the Pre-Raphaelite Brotherhood, entitled ‘The Shadow of Death’? It depicts the inside of the carpenter’s shop in Nazareth. Stripped to the waist, Jesus stands by a wooden trestle on which he has put down his saw. He lifts his eyes towards heaven, and the look on his face is one of either pain or ecstasy or both. He also stretches, raising both arms above his head. As he does so, the evening sunlight streaming through the open door casts a dark shadow in the form of a cross on the wall behind him, where his tool-rack looks like a horizontal bar on which his hands have been crucified. The tools themselves remind us of the fateful hammer and nails.

In the left foreground a woman kneels among the wood chippings, her hands resting on the chest in which the rich gifts of the Magi are kept. We cannot see her face because she has averted it. But we know that she is Mary. She looks startled (or so it seems) at her son’s crosslike shadow on the wall.

The Pre-Raphaelites have a reputation for sentimentality. Yet they were serious and sincere artists, and Holman Hunt himself was determined, as he put it, to ‘do battle with the frivolous art of the day’, its superficial treatment of trite themes. So he spent 1870-73 in the Holy Land, and painted ‘The Shadow of Death’ in Jerusalem, as he sat on the roof of his house. Though the idea is historically fictitious, it is also theologically true. From Jesus’ youth, indeed even from his birth, the cross cast its shadow ahead of him. His death was central to his mission. Moreover, the church has always recognized this.”

I haven’t been this hooked by an opening three paragraphs in a long time!

“For the message of the cross is foolishness to those who are perishing, but to us who are being saved it is the power of God.” –  1 Corinthians 1:18