On November 10 last year I had a go at cycling to work for the first time. Colleagues that saw me on the road later said: “You looked really exhausted!”

Since then by God’s grace  I’ve cycled to work over half the time now, to the point where our car only needs a half-tank of fuel every month. I’ve spent over 120 hours and tracked over 2400km on the roads and pathways around Auckland (and even Taipei for two weeks). According to my Runkeeper stats I’ve burned 64,000 calories over this time (that’s 177 Cheeseburgers’ worth – though I’m sure I have eaten that much extra in return!).

Only a year ago I would never have considered riding a bike to be enjoyable in the slightest.

It’s been a family affair too, with E tagging along for several rides and Cheryl learning how to ride a bike herself. Maybe in a years’ time we’ll be one of those strange families that go out cycling for fun! 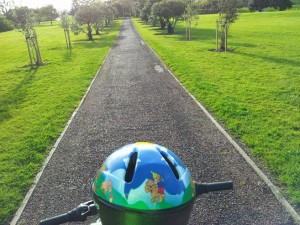 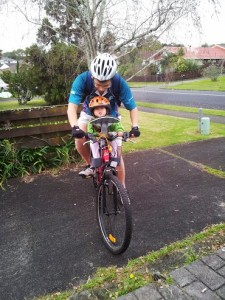 Some cycling highlights for me personally:

One reply on “Thankful for a year of cycling”