It’s funny how some memories are etched in your mind more vividly than others.

I remember one Sunday driving, with my late mum in the front passenger seat. I was 19 at time, still a new Christian. We were driving through Botany to drop her off at the Fo Guang Shan Temple in Flat Bush, where she served often with the Buddhist organisation.

As we waited at the intersection, I noticed the church in front of us had the flags for several countries flown at full mast. They were billowing in an array of colours across a cloudless blue sky, a kaleidoscopic statement of the nationalities represented in that church family.

My mum looked up for a moment, then pointed at the flagpoles and remarked that it was the only place she’d ever seen the Taiwan ROC flag flown alongside the China PR flag.

(If you don’t know, Taiwan isn’t an official country according to the UN, and there’s ongoingÂ political pressure from China not to fly the Taiwanese flag. From the Chinese point of view, Taiwan’s the prodigal son that needs to return to the fold. From across the strait, Taiwan sees itself as politically and culturally distinct from Mainland China).

While I’m half-Taiwanese via my mum’s bloodline, at the time I didn’t think much of her observation. But today, the picture of those flags flown side-by-side is etched in my mind, representing something only Jesus Christ can do: break down barriers and bring true peace and reconciliation between two opposing sides. 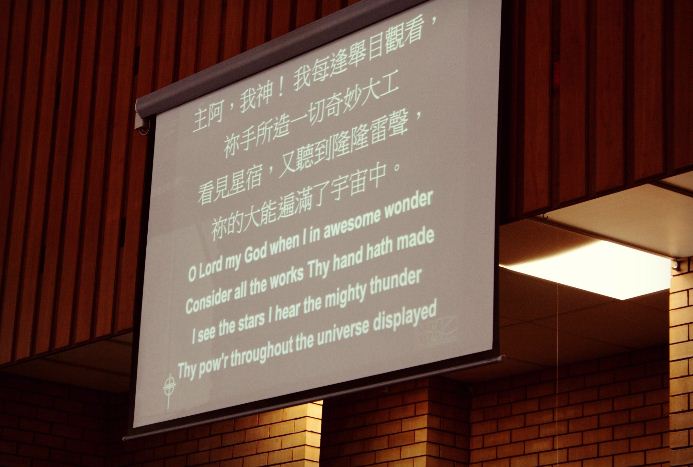 Fast forward nearly a decade to last Sunday: when our church was joining with the Evangelical Formosan Church (they meet in HBC’s building) in a combined worship service, I thought again about how Jesus really is our peace.

As PeterÂ preachedÂ so magnificently on Sunday from Ephesians 2:11-22, Jesus himself is our peace, who breaks down the dividing wall of hostility between us, who reconciles us to God in one body through his atoning death on the cross, and who grants access in one Spirit to the Father.

And to know that in EFC church there are Mainland Chinese and Taiwanese Christians, worshipping Jesus together, gave me so much encouragement and hope. Not merely that there’d be political resolution between China and Taiwan (even if there was, it would never be perfect), but that in Christ there would be true peace and reconciliation between Chinese and Taiwanese people. And likewise, that in Christ there would be peace and reconciliation between whites, blacks, Pacific Islanders, Africans, Asians, Europeans, South Americans, in churches around the world that herald and live out the gospel.

And to imagine that one day, an innumerable multitude from every nation, from all tribes and peoples and languages, who were once alienated from each other, will be united in worshipping Christ:

“After this I looked, and behold,Â a great multitude that no one could number,from every nation, from all tribes and peoples and languages, standing before the throne and before the Lamb,Â clothed in white robes, withÂ palm branches in their hands, and crying out with a loud voice,Â â€œSalvation belongs to our God who sits on the throne, and to the Lamb!â€ (Rev 7:9-10)

What a memorable day that would be.