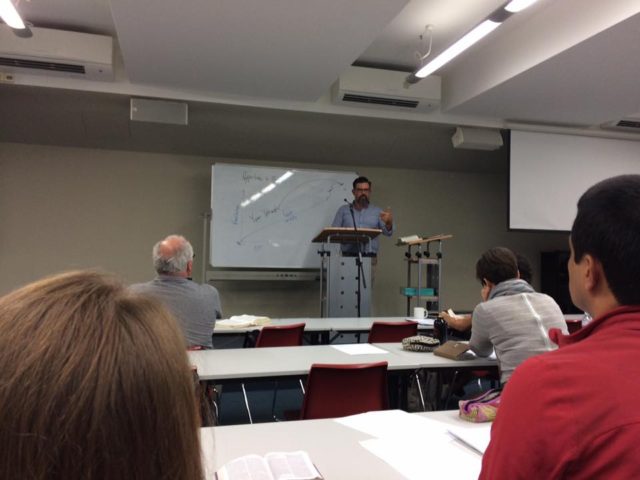 We’ve just finished our first semester here at Sydney Missionary Bible College, where I’m studying towards a Masters of Divinity.

It’s been exhausting on some fronts – adjusting to life in Australia with a young family, scrambling to build new friendships and relationships, grieving as NZ friends move on with their lives. I don’t think we’ve ever been as sick with colds and flus as this past 6 months.

It’s been enriching on many fronts – drinking from multiple fire hoses gushing with theology, observing examples of godliness, and catching the passion to bring Christ to all the nations – literally. What a special place this is to be prepared for a lifetime of gospel ministry in NZ.

I’ve noted down for posterity what others have said this semester – nuggets of wisdom worth retaining longer than all my ephemeral InstaFaceTweets combined. Most of these were from lectures and chapels; some were from conversations over lunch and dinner with staff and students; a few are quotes from other places. I hope some of them are helpful to you.

“If learning church history doesn’t contribute to your godliness and discipleship, then it hasn’t done its job.” – Stuart Coulton

“The Crusades. Nazi Germany. How could ‘Christians’ do such evil things? They were Christians who failed to critique the values of the world around them.” – S.C.

“We carpet bomb a city to save democracy [Dresden]. Should we kill a man for denying the Trinity [cf. Calvin and Servetus]? Church history gives us provocation and tools to wrestle with these propositions.” – S.C.

“What and where it happened is not as important as why it happened.” – S.C.

“Early Christianity stood out by its holiness. Is our church today known for its quality of life? What difference has Christ made to me?” – S.C.

“You work out what the error is by the way the truth is articulated.” – S.C.

“The difference between an ascetic and and aesthetic comes down to chocolate. The ascetic says no. The aesthetic says, ‘Only Lindt will do.'” – S.C.

“The church sometimes stops at bishops and creeds, but pays lip service to Scripture.” – S.C.

“The church has a need for many things, but what it really needs is good doctrine. We live in a world where pragmatism is the most popular authority. So assume nothing. Go back to Scripture and ask: is this truth biblical?” – S.C.

“Christians in the West treat Revelation in ways that John would be horrified. Does reading Revelation move you to pray for the persecuted church? If not perhaps we’ve missed John’s purpose for the letter.” – Rachel Ciano, Persecution and Apologists

“Fast growth in the early church meant nominal Christians with shallow roots. Christians lived in a time of peace, so were unprepared; many gave themselves up. May it be a lesson to us not to be caught unprepared.” – R.C.  on the Edict of 250 AD requiring Christians worship the Roman Emperor.

“‘For the church to be marginalised is not a bad thing. It has better eyes to see from the edges.'” – R.C. paraphrasing Miroslav Volf

“If you’ve found something new that no one has ever thought of before, be careful. People have been thinking about things longer than you.” – R.C.

“One of the greatest things about church history is that you’ll never hero worship anyone. You see their black spots; everyone has feet of clay.” – S.C.

“Don’t write these guys off [early monastics]. Otherwise we’ll have nothing to learn. These monks asked: what does it look like to seriously follow Jesus? Part of me is provoked… How much am I prepared to follow Jesus?” – S.C.

“FF Bruce suggests that the Reformation is all about Augustine’s doctrine of the church colliding with his doctrine of salvation.” – S.C.

“If you find yourself separated from the majority of the church, then show some humility.” – S.C. summarising Augustine’s argument about the church

“Herulean Oduvacar is the perfect name to drop into a dinner party conversation. He was the first non-Roman to sit on the throne. You think Donald Trump is shocking!” – S.C.

“In the Middle Ages, nobody believed in the separation of church and state. The issue at this time is which side is in charge.” – S.C.

“Don’t defend the Crusades. They are a complete blot on the Christian church.” – S.C.

“We are tempted to promote the cause of Christ using instruments of the world. But Zechariah 4:6 reminds us that it’s ‘not by might, not by power, but by my Spirit.'” – S.C.

“The real outrage with Luther was not that he had beer, but that he got married.” – S.C.

“The priesthood of all believers has politically explosive implications.” – S.C.

“One of the temptations for us is to lack confidence in the power of God’s Word. ‘You need topical. You need something else.’ No – it is the means by which salvation is accomplished.” – S.C.

“Lutheranism today is different to Lutheranism 500 years ago. Calvinism remains influential over the years, perhaps because it left a more systematised doctrine.” – S.C.

“Luther is all about stuffing the ark – ‘get them in’. Calvin wants to transform the ark – ‘sanctify them'”. – R.C., on the difference between Luther and Calvin

“One reason laments have lost their place in today’s worship is that we have a problem with saying ‘God, you did it.’ Withhold nothing from the sovereignty of God.” – R.C.

“Your church building says a lot about your theology.” – R.C. on church architecture

“Most of South America is Roman Catholic because of the Jesuits. While Protestants were infighting, they became a worldwide RCC. Parochialism is the enemy of the gospel. Don’t debate each other at the expense of gospel proclamation.” – R.C. on the Catholic counter-reformation

“To pray for God to be glorified in your life is a dangerous prayer.” – Stuart Coulton, Pastoral Theology

“What God does in you will shape what He does through you.” – S.C.

“[I] didn’t realise how dangerous Stuart’s prayer was until later in the year.” – student in the valley.

“In my class, the answer is usually Jesus, or context.” – Alan Thompson

– adapted from A.T. explaining the role of biblical theology

“Learning Greek is like Jacob wrestling with the angel. You need to hold on to that word and say: ‘I will not let you go until you bless me!'” – Rob Plummer on dailydoseofgreek.com

“We’re going to look at some of the greatest literature ever written.” – Kit Barker

“In time you’ll learn to use dictionaries, commentaries and journals. But nothing replaces a careful, repeated reflection of the text. Keep asking: what is God doing with this text then and now?” – K.B.

“The Pentateuch is meant to persuade you to obey – it’s not to be held at arm’s length. It’s meant to shape us, transform us into better men and women than we were.” – Geoff Harper

“Genesis records history, but it also critiques our own hearts. It’s less about what the sun is made of, but why it is there.” – G.H.

“There’s a diversity of views out there [on Genesis 1-2], but we are Christian. It’s very unwise to die on this hill. We need to love people who are different.” – G.H.

“To help us understand the literary artistry in the Tower of Babel story, let’s read  The Gruffalo  and see if you can spot any artistic devices.” – G.H.

“[In the Joseph story] Judah’s repentance is real. He’s willing to be Benjamin’s substitute, to be a slave so Benjamin can go free. We see the necessity for repentance to precede forgiveness. If we repent, we’ll get reconciliation.” – G.H.

“As Christians we need to be careful not to have an Islamic [i.e. dictated] view of Scripture. It’s OK if divine inspiration is more complex than we thought. We have a God who stands behind it.” – G.H.

“Let me make some bold statements: Leviticus is not just a relic of Israel’s history; it’s your history. It’s not redundant, but essential. You can’t understand Jesus unless you understand what’s in Leviticus: atonement, forgiveness, care for the foreigner, blood, sacrifice, holiness. So study Levicitus to understand Christ better.” – G.H.

“Leviticus is a wonderful evangelistic text. Lots of people are terrified about being unclean before a Holy God. Jesus is the one who makes us clean. Leviticus pushes us to talk about this.” – G.H.

“To remove wrath from the cross is foolishness. What then did he die for? Then there’s no sense in which God demonstrates his love.” – K.B.

“[The wrath of God] is not just an Old Testament problem. In fact, the NT is far more violent — in both the crucifixion [of Jesus] and in the unleashing of God’s fury on all who reject him.” – K.B.

“The more we understand and accept God’s wrath against rebellion, the more we appreciate the love of God and what Christ suffered.” – K.B.

“One generation is all it takes to lose the nation – to be worse than the culture you’re in. So we must pass on the life-giving words to the next generation.” – K.B. on Judges

“It’s easy to do dump truck preaching. It’s much harder to be simple.” – M.G.

“‘My son’s birthday party’ – could be kids with party hats, or as it turns out, an adult son released from prison. Find out who you’re speaking to!” – M.G. on evaluating your audience

“In preaching you bring a meal out from the kitchen. You don’t take them into the kitchen and show them all the ingredients.” – M.G.

“If you’ve come to bible college, there probably is a Messiah complex about you. But our effectiveness in ministry is solely by God’s grace. The gospel gives us both confidence and humility in gospel ministry.” – Mark Adams, on 1 Cor 15

“Genesis 38 pictures a man in the midst of rebellion, confronted with his deception, then immediately acknowledging this wrongdoing, who becomes a new person. God transforms the hardest of hearts.” – Kit Barker

“People have a right to see in us a radical reflection of Jesus.” – S.C., on Matthew 5

“Jesus had nothing to add to the commandments except one thing: he kept them.” – S.C. quoting Dietrich Bonhoeffer

“There is a difference between having strong convictions and lacking respect for others with whom we disagree.” – S.C., on Matt 7:1-6

“One of the dangers of college is that our skillset outstrips our character. So begin with a command like this: don’t judge.” – S.C.

“Some advice for bible college graduates – don’t whine, don’t shine, and don’t recline.” – from an OT lecturer at Moore College

“Competence without character in Christian service is not just unattractive, but incredibly dangerous.” – S.C.

“Ministry Matters [hearing from missionaries every week] will help us lift our eyes away from parochialism and our tendency to only look locally.” – S.C.

“Some cultures don’t even have a word for guilt in their language. How do you explain Romans 3 to them?” – Richard Hibbert, on cross-cultural communication

“[Why are we missionaries in an unsafe country?] Safe is relative. You could be in Australia and get hit by a car. Is Christ worthy for West Asians to praise? If so then it is worth being here for the sake of the gospel.” – X+X, missionary family with young children